The scope of food ethics is broad and it touches cultural, political and economical aspects. Discussions centre around a variety of topics such as food security, food sustainability, global hunger, novel technologies, traceability, obesity, agro food production, biofuels, modern animal production and welfare and so forth. Therefore food ethics should be considered as a heterogeneous and multidisciplinary discipline. One of its main responsibilities is to safeguard and promote good health, which is the condition for a good life.

Ethical goals for responsible action in food can be traced back to “respect for human dignity” and “justice” that guarantees equality, fairness and equity between citizens within a society and all societies in current and future generations. Nutrition, food production and its consumption are considered in the teachings of the Quran, Sunna and hadith and are guided by the rules of Islamic ethics. Islamic ethics emphasizes food that is good, wholesome, and pure among that which is permissible (halal).

Food with this characteristic is called ‘tayyib’ in Arabic and refers to purity both in the physical and moral sense. The Quran advises: ‘Oh you apostles! Partake of the good things and do righteous deeds’. Additionally, taboos are clearly mentioned in the Quran and prophetic reports. Islamic guidelines and principles were revealed for human beings as a remedy to preserve inner health and higher well being. This is stated in the Quranic verse: ‘It is, for those who believe, a guidance and cure’.

Islamic applied ethics places emphasis on the concept of public utility or common good (maslaha). The concept’s aim is to promote and protect the common good and interest of humankind and prohibit it from what is bad and harmful for the public benefit and welfare. Al-Ghazali defined maslaha as the ultimate goal of the sharia (Islamic law). On the one hand, Islamic teachings provide guidelines on specific food codes; but on the other hand, secular-scientific knowledge of nutrition and food is essential to develop a comprehensive understanding of the subject. These two components are essential to issue a legitimate legislation (fatwa) and therefore it is essential for Islamic scholars to work closely with food scientists and experts. However, worldly matters in relation to food production should not contradict the sources of Quran and Sunnah. 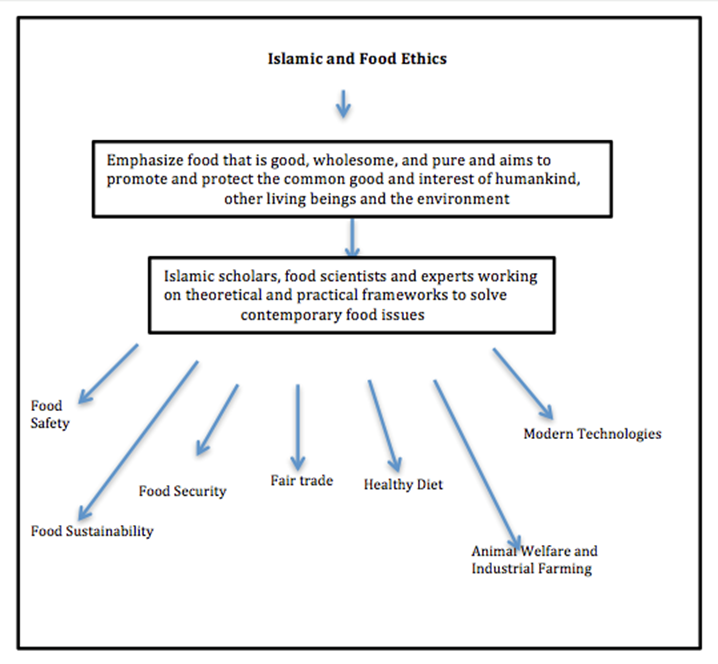 Let us now turn to a more detailed elaboration of the content of Food Ethics and Islam; i.e what are the key subjects that Food Ethics is dealing with and why is it so important to engage with a topic such as Food Ethics in contemporary times. Food sustainability has a prominent place in the discussion of Applied Ethics. The term is broad and it includes several topics with regards to food. According to the WBCSD sustainability can be defined as meeting ‘the needs of the present without compromising the ability of future generations to meet their needs’.

As mentioned above, the principle in pursuing justice between current and future generations is a very important aspect in food ethics. However, our current food systems show clear indication of unsustainability and therefore urgent changes and reforms need to be made in contemporary food chains. Indicators of food unsustainability are high-intensity animal production, production out of season but also high green house emission, energy use, water consumption and waste of industrial manufacturing systems.

These factors clearly contribute to global warming and further pollution of the planet. Food safety is an integral part of food sustainability; it aims to preserve the condition and quality of food from contamination and food-borne illnesses. Food safety concentrates on production methods such as growing, harvesting, and processing but also on transporting, preparing, distributing and storing food. Most food related diseases are the cause of viruses, bacteria and parasites but also the result of poisoning from toxic and chemicals that are transferred from food to the body. In the past several years, world wide food-borne illnesses have occurred such as mad cow disease (BSE) or the H5N1 virus (also known as bird flu).

These events had governments and international trade organisations but also consumers reconsider how we produce and what we eat. Genetically modified food is another extremely important issue in food safety but this paper will discuss this point in greater depth later in this article. Another key aspect in sustainability is food security. Its purpose is to enable global access to sufficient, safe and nutritious food for all human beings. As food sustainability and food safety, food security has a multidimensional nature of definitions and issues that it is concerned with. The WHO defines it in 4 dimensions: food availability, food access, utilization and stability. A key goal in food security is to reduce the number of undernourished.

The United Nations already recognized and integrated the concept ‘The Right to Food’ into the UN Declaration of Human Rights in 1948. Hence it plays a significant role for governments, the United Nations and NGOs in their fight to minimize famine and ensure food assistance to the poor and vulnerable. Islamic ethics also emphasises the struggle against poverty and world hunger. This struggle is reflected in the religious practice of zakāt (almsgiving) and in the institution of awqāf (Islamic religious endowments, charity). In addition, there are many reports of the Prophet (pbuh) in which he urges Muslims to give food to the poor. In one tradition he states that ‘the person who sleeps full while his neighbour sleeps hungry is not a true believer’.

Interestingly, the number of obesity cases is on the rise and even surpassed the undernourished world population. Obesity and food hunger are both dependent on modern agricultural production. In aiming to improve global hunger, modern production systems need to be made more effective, especially in developing countries. However, industrial food production and farming constitute a crucial issue within food ethics. In particular animal farming presents a critical topic in modern food processing.

This has led to concerns of how industrial animal agriculture affects animal welfare, human health, the environment and food safety. The issues surrounding contemporary animal farming have also given rise to debates within Islamic ethics and the question of consistency with Islamic sources. There are clear indicators that the contemporary Halal meat production systems in Muslim majority countries and in the West only emphasise the Islamic implementation of the technicalities of slaughtering. Yet respecting the lives of animals and their dignity appears to have been forgotten by fuqaha (jurists), Islamic production companies and Muslim majority governments. New innovations in biotechnology, such as genetically modified crops, have brought ethics to the forefront of food debates.

Genetic engineering is the process of transferring genes from one plant or animal to another. Through this new technique, vegetables can be grown and processed more efficiently. Genetically modified food possesses benefits such as herbicide tolerance, pest and disease resistance, cold tolerance and drought - and salinity tolerance. In the US and Argentina GM food has been welcomed by the farming community and it did not meet significant rejection by consumers. However, especially in Europe this new development is facing greater opposition.

Genetic engineering is a quite recent innovation in biotechnology and the precise effects on human health are still contested; hence debates discussing the legalisation of genetically modified food continue in both Western and Muslim majority countries. Yet NGOs, governments and consumers are concerned for producing and eating ethically. Non-profit organisations work to persuade supermarkets to stock fair trade- and organic products. Since 2002, two British supermarkets, Marks and Spencer and Waitrose, have only sold free-range eggs. In January 2012, the European Union effectively banned battery farming due to welfare concerns. The stocking of fair trade products is also increasing in Western countries.

More and more supermarkets offer fair trade products but also food and coffee chains include fair trade into their product lines. It is categorically unacceptable to produce food without offering fair working conditions, without prioritising safety at work (such as by providing gloves and face masks to employees who have to work with chemicals) and obviously without paying workers fair wages. Consumer behaviour also changed towards a more critical and ethically way of eating especially in developed countries, as the focus shifted from the basics of hunger and the supply of food. Citizens are able to ask questions on where their food comes from and how it was produced. Does the food contain pesticide and herbicides? Did animals suffer? Did the farm workers receive fair wages? The demand for organic food is rising especially in Western countries. People want to eat healthy and hence dislike the consumption of food produced by using chemicals and pesticides. The preference to eat only organic meat and only that from species-appropriate husbandry is also rising amongst consumers. But there are also trends to move to a purely vegetarian diet. Vegetarians do not eat any meat, poultry, and fish but as well abandon dairy products, eggs and honey.

However, it has to be considered that while consumers indeed have the motivation and the aim to eat healthier and more ethically, there is a gap between people’s attitudes and their behaviour. There are many factors involved in causing this gap. Lack of access to food with ethical attributes is one of the factors. But also the high prices of organic food are generally contributing to barring consumers from eating ethically. To conclude, this article shortly discussed the complex topic of Food Ethics in broad terms, and specifically in relation to Islam. Food Ethics aims to safeguard and preserve good health, and aims to prevent any harm to human beings, other-living beings and the environment.

The UN, governments and NGOs have increased their focus on food issues and aim to address current problems by issuing new national and international legislation. However, as this article has shown, contemporary food problems are immense and internationally coordinated steps and changes to the system are needed to protect humans, animals and the environment from endless suffering. Also Islamic scholars need to begin addressing current food problems and provide theoretical and practical frameworks with regards to food ethics.