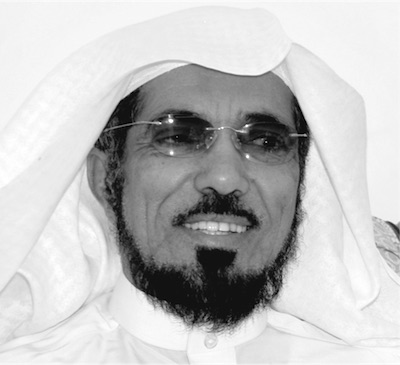 Salman bin Fahd bin Abdullah Al Ouda was born in 1956 in the village of Al Basr, which is part of the city of Buraidah in Al Qassim, Saudi Arabia. He began his education at Al Andalus Elementary School, and then went to study at the Scientific Institute in Buraidah. He also studied at the Faculty of Arabic language and then the Faculty of Sharia at the University of Imam Muhammad bin Saud in al-Qassim. He returned to the Scientific Institute in Buraidah to work as a teacher for four years, and then as a lecturer at the same University. He obtained a Master’s degree in the Sunnah and its sciences from the Faculty of `Usûl al-Dîn (Principles of Religion), on the subject of “Prophetic sayings on immigration and their rulings in the Prophetic Tradition.”

He obtained a doctorate degree in Sharia (Islamic Law) and his PhD thesis was about explaining the book on cleanliness from Bulûgh al-Marâm, published in four volumes, supervized then by Sheikh Dr. Abdullah bin Biya.  Al Ouda founded the group Islam Today and supervised it for the first ten years and then moved to establish other new projects.  Dr. Al Ouda is the deputy chairperson of the Al Nusra World Organization. He is a member of the Board of Trustees of the International Union for Muslim Scholars, member of the Council of the European Fatwa, and is a member of a number of associations and charitable and scientific organizations in the Islamic World.

Al Ouda has numerous publications mostly translated into several languages. He participated in a number of conferences and scientific symposia.  He also has recorded programs and live TV shows with many television channels such as: Al Majd, Al Resallah, Iqraa, Daleel, Al Jazeera, MBC and many others. He also wrote articles in a number of newspapers including electronic newspapers, and currently has a weekly column in (Islam Today) website, Kuwaiti Society magazine, the Bahraini newspaper Al Bilad, the Qatari newspaper Al Sharq, to name but a few. Al Ouda has numerous reviews and participations in many social networks.