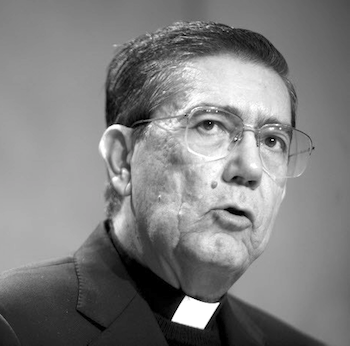 Secretary of the Pontifical Council for Inter-religious Dialogue, as titular bishop of Luperciana. Fr. Miguel Ángel Ayuso Guixot was born in Seville, Spain, on June 17 1952. He took his final vows in the Institute of the Comboni Missionaries on May 2, 1980 and was ordained a priest on September 20 of the same year. He worked as a missionary in Egypt and Sudan until 2002. He earned a licentiate in Arabic and Islamic studies from the Pontifical Institute of Arabic and Islamic Studies (PISAI) in Rome in 1982 and a doctorate in dogmatic theology from the University of Granada, Spain, in the year 2000. Starting in 1989 he was professor of Islamic Studies first in Khartoum, Sudan, and then in Cairo, Egypt, before joining the PISAI, of which he was eventually appointed rector, where he remained until 2012. Fr. Guixot has presided over several meetings on inter-religious dialogue in Africa, specifically in Egypt, Sudan, Kenya Ethiopia and Mozambique. He has also authored various books and has been published in international journals. On June 30, 2012 Pope Benedict 16th appointed him as Secretary of the Pontifical Council for Inter-religious Dialogue. Fr. Guixot is fluent in Spanish, Arabic, English, French and Italian.