Prominent Professor of Islam emphasizes the Harmony between Freedom and Shariah 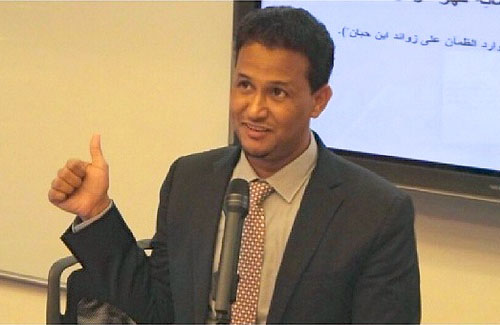 The Research Center for Islamic Legislation and Ethics (CILE), a member of the Qatar Faculty of Islamic Studies (QFIS), organised a lecture on “Sharia Application in Free Societies: From the Legal to the Ethical Perspective” On Tuesday Dec. 03, 2013, at the QFIS headquarters in the Education City.

The lecturer Dr Mohamed El-Moctar El-Shinqiti, a prominent political thinker and Professor of Islam and political ethics at CILE, started his lecture by emphasizing the harmony between freedom and Shariah and the necessity of bringing freedom and Shariah together, in order to save the current Muslim societies from the cultural and ethical schism between Islamists and secularists, and to open new horizon for a historic reconciliation with oneself and with the rest of the human family.

Dr El-Shinqiti also exposed the obstacles preventing for this integration between Shariah and freedom today. Among these obstacles he mentioned: the lack of the sense of practicality, the absence of a clear definition of the concepts of ‘Shariah’ and ‘application of Shariah’. He said that Muslims need to have a clear theory of religion that reflects the comprehensiveness of Islam, to overcome the dualism between divine law and human law, and to develop a clear distinction between the two aspects of morality and legality in Shariaa.

The lecture had a large audience, and was concluded with questions on the ethical and jurisprudential challenges that reflect the state of moral and intellectual anxieties brought about by the Arab Spring.

This lecture is part of a series of public events organised by CILE that are planned throughout the academic year. Each lecture will focus on one of several disciplines covered by CILE research work, including: economics, politics, arts, media, environment, bioethics, psychology, methodology and gender studies. By organizing such events, CILE seeks to bring together a group of top-notch experts and scholars of text and context to deepen discussion of legal and ethical issues and provide ethical approaches and solutions.

12/2013 Dr Shinqiti: Sharia Application in Free Societies: From the Legal to the Ethical Perspective